Blood Groups: What They Are And Why You Should Know Yours.

Blood groups also known as blood type is defined as the classification of blood based on the presence or absence of inherited antigenic substances on the surface of red blood cells (RBCs).

A and B antigens (agglutinogens)

Two antigens (type A and type B) occur on the surfaces of the red blood cells in a large community of human beings. Because of the mode of agglutinogen inheritance, people may have one, both or none of the antigens.

Two genes, one on each of two paired chromosomes, determine the O-A-B blood type. These genes can be any of the 3 types but only one type on each of the two chromosomes. Type O, A or type A. the type O gene is functionless or almost functionless as it causes no significant type O agglutinogen on the cells while the type A and B genes do cause strong agglutinogens on the cells. A and B blood groups are co-dominant while A and B blood groups are dominant over the O blood group. Each person has two copies of genes for their ABO blood group (one of paternal and another of maternal origin). 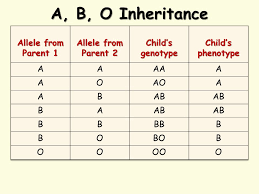 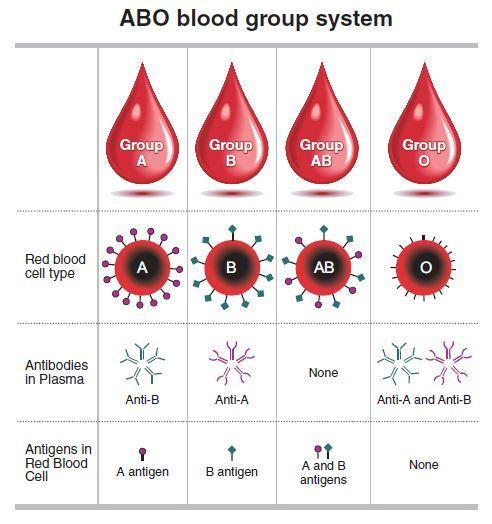 There are 6 common types of Rh antigens each of which is called Rh factor. they are designated A,B,C,D, and E. The type D however, is the most prevalent in the population as well as the most antigenic (that is, the most likely to cause a transfusion reaction). Thus this blood group is determined by the presence or absence of the D antigen.

The presence of the D antigen, connotes the rh positive and its absence means the person is rh negative. Thus an individual that is Rh negative can develop or produce antibodies against a red blood cell with the D antigen (that is one who is positive).

Summary of the various blood types using both the A-B-O and rhesus system. 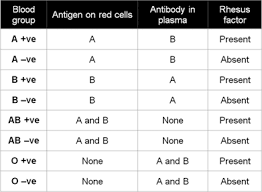 Why then should you know your blood group?

Knowledge of blood group was discovered or rather identified following immediate or delayed haemolytic reactions following transfusion (transfusion reactions). It was then realised that antibodies in the plasma of one blood will react with antigens on the surfaces of red blood cells of another blood type.

It can then be inferred that knowledge of one’s blood assists physicians in making quick and appropriate interventions when blood transfusion is required so as to save life and at the same time avoid life threatening transfusion reactions.

What are transfusion reactions?

These are complications that occur after a blood transfusion. It can be acute (that is immediate) or delayed. A common example is the haemolytic transfusion reaction. This occurs when donor and recipient bloods are mismatched. The red blood cells are then seen as foreign since they contain antigens not recognised by the recipient and are thus destroyed by the recipient’s immune system. This is can then be prevented by determining the donor and recipients blood type and ascertain the compatibility. 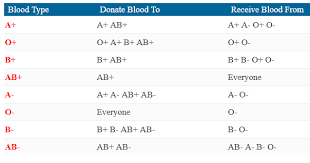 It is also worthy of note that antigens that are present on the red blood cells because of their pattern of inheritance are also important to establish parentage.

The knowledge of blood grouping also assists in prevention of diseases such as ‘erythroblastosis fetalis’ which occurs as a result of antigen antibody reaction between the fetal and maternal blood.

Written and compiled by;